In STAR DAS and WIS, the Engine Electric Suction Fan (Cooling Fan) is referred to as “combustion engine and air conditioning with integrated control fan motor” and is designated M4/7. 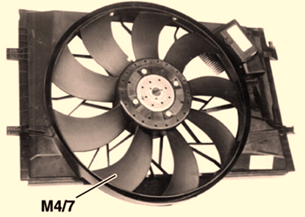 Each type of Fan Control Unit employs PWM which stands for Pulse Width Modulation and refers to the very efficient method for controlling the fan motor speed. The voltage applied to the fan motor is "chopped" between 0V and 12V with the resulting fan speed being determined by the degree of "chopping".

These diagrams were obtained by observing Cathode Ray Oscilloscope (CRO) measurements of typical control signals and the Suction Fan voltages.

The control signals from the Fan Control Unit match the above diagrams except that the amplitude of the signals is about 3Vp-p instead of 12Vp-p.

A common cause of no fan rotation is a failed Fan Control Module, either external or inbuilt. The large currents can stress electronic components and the car is a hostile environment with vibration, heat, and moisture all present in large quantities. A weak component or electrical connection can also produce a large amount of heat due to the very high currents being controlled, thus leading to complete failure. 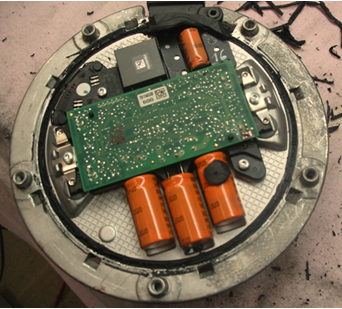 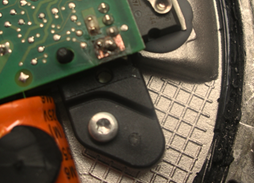 Most enthusiasts replace a failed Engine Electric Suction Fan (Cooling Fan) with a complete new unit but on later models with inbuilt Fan Control Module it is possible to just replace the fan motor and controller with consequent savings on cost and shipping. Check eBay for suppliers of fan motors.

DIY How To Replace Engine/Radiator Fan

The following Diagnosis and repair was done on a W204 but is relevant to other M-B models:

This DIY document refers to both W211 and W220 models and may be relevant to other Mercedes-Benz models.

By changing the temperature at which the cooling fan on my 2003 W220 S500L comes on to a lower value, I have improved the performance of the car’s air conditioning on hot days. The air coming from the cabin vents now feels sharp (cold) even when the car is idling at traffic lights. Before the adjustment, the cabin became noticeably and uncomfortably warmer after idling for a few minutes.

Note my air conditioner is permanently left on at 22°C or 23°C in automatic mode.

Detailed Engine Coolant Temperature versus time graphs (before and after adjusting the Temperature Correction Value) are shown.

Sample of data results: A Temperature Correction Value of 0°C (M-B Factory Setting) means the Engine Cooling Fan switches on at 97°C and off at 92°C. This can clearly be seen in the sample graph. 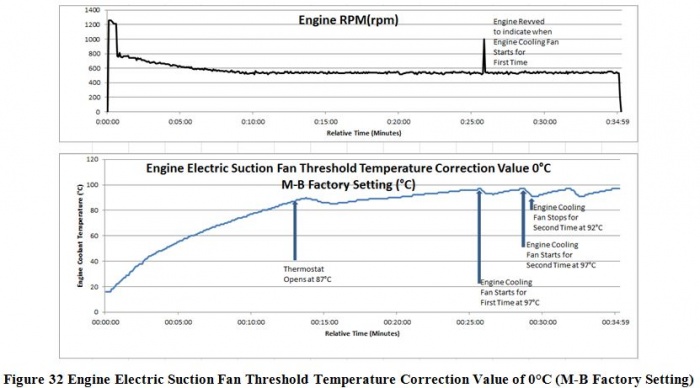 In my opinion the ACC now works as M-B intended, that is completely effectively, even in extremely hot climates, and quite unobtrusively, befitting the performance and elegance of an ‘S’ Class.

In the process I discovered a fabulous tool for wirelessly logging data from my car to my Smart Phone and Desktop Computer. Refer to: Code Readers

Refer to BenzWorld Thread and DIY pdf attachment at Post #49: