COMAND 2.5 refers to the first generation of COMAND systems, introduced on the W220. The "2.5" label seems to refer to the fact that the main COMAND unit for this first generation had a height of 2.5 DIN. This COMAND system had a cassette drive, a built-in CD drive for the navigation map discs, an FM/AM radio tuner, a 4-channel amplifier and external connectors to other systems. The European models used Tele Atlas map discs (CD). Towards the end of 1999, the system was upgraded to use the improved DX type navigation discs. COMAND 2.5 uses a [D2B] optical bus for connection to the external CD changer, the telephone system, the optional Bose surround sound system and the optional Linguatronic voice control system. The COMAND 2.5 unit was made by Bosch.

From S-Class model year 2003 (facelift), COMAND 2.5 was replaced by a widescreen version of COMAND known as COMAND 2.0 MOPF. COMAND 2.0 is the same technology as the COMAND 2.5 except that everything is in one double-din height device, the casette drive was removed (and an AUX input added) and the navigation drive could also be used for audio CD. The units use DX type mapping CDs. The COMAND 2.0 unit was made by Bosch. There is COMAND 2.0 unit for European market (ECE) and U.S. market (USA).

For vehicles with option code 527 (ECE):

For vehicles with option code 530 (USA): 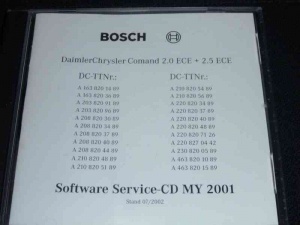