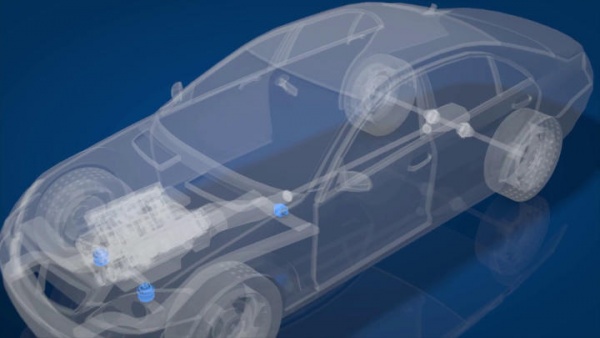 Engine mounts are made with a rubber material so that there is no direct metal-to-metal contact between the engine and the car body. To further dampen the vibration, front engine mounts are filled with liquid. A liquid-filled engine mount works like a shock absorber. An engine mount doesn't need any maintenance or regular servicing. It only needs to be replaced when it fails or wears out.

The most common problem with the engine mount is when the rubber part breaks or separates or when liquid starts leaking out of the liquid-filled mount. Common symptoms of a failed engine mount is the increase in engine noise and vibration felt inside the car. Often, the excessive vibration is more noticeable at idle with the transmission engaged.

How a failed engine mount is diagnosed

Visible signs of a failed engine mount include cracks, tears and separation in the rubber, as well as leaking liquid. See the photos above. A worn-out engine mount may appear sagging.

Before a bad engine mount is confirmed, all other causes must be eliminated. For example, when one of the exhaust pipe hangers is broken, it may create the same symptoms as a bad engine mount. When a bent or damaged exhaust pipe touches one of the chassis components, it also creates vibration and rattling noise when shifted to Drive or Reverse noticeable inside the car. Often, when one of the mounts is bad, an engine may appear seating lower on the side of the bad mount. Often when one engine mount goes bad, it adds more strain on all other mounts. For this reason, it's not uncommon to see two mounts that need replacement at the same time.

Many Mercedes-Benz owners experience vibrations through the interior of the car, the steering wheel and the seat which is the first sign that your engine mounts are failing or have failed. Sometimes a very common "shaking at idle" issue can be solved by replacing the engine mounts. Other Mercedes-Benz owners have reported having a smooth idle until you put the car into gear, then a vibration is noticed.

Below is an example of new and old W220 engine mounts (V12 engine). Notice how the old mount has collapsed by about one third its height. The other picture shows a complete split in two with zero hydraulic fluid remaining after 143,000 miles (230,000Km).

Failed front engine mounts can be diagnosed by following these steps: 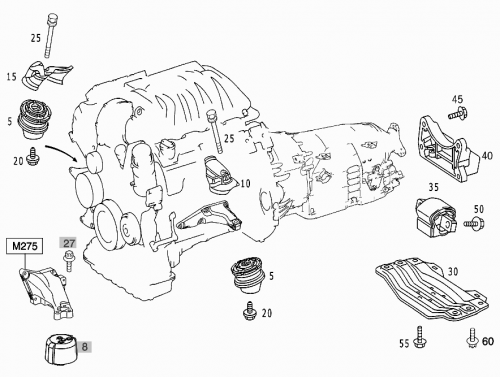 The original mounts on the Mercedes-Benz are made by LEMFÖRDER. Even though genuine mounts are expensive, the general opinion is to NOT buy aftermarket brands

Both mounts (left and right) have the same part number.

Right engine side (removal of engine mount and engine support):

Note: WIS specifies removing both the engine mount AND the engine support (the portion that connects it to the engine block). This worked fine on the RIGHT mount, but on the LEFT, a hose prevented taking the mount out/or installing, in one piece. This required a combination "Bottom-Side" and "Top-Side" approach.

Universal instruction for Mercedes-Benz cars with the V6 and V8 engine: http://www.mercedesmedic.com/diy-engine-mount-replacement-with-pictures-video-mercedes-benz/

A rear engine mount (transmission mount) replacement is a super easy job - it takes less than 2 hours to do the job without jacking the car at all four jacking points. It actually takes more time to get the car lifted, as it does to remove and replace the mount, plus, as opposed to the "expensive" front mounts, the rear mount costs ~ 20 EUR. The procedure shown in this video is on W220 S500 (2000), but may be as applicable to many other Mercedes models of the same year and even other years.

One suggested "variation" from the WIS technique is to not remove the crossmember. You can loosen it sufficiently to get the mount in/out if you minimally (1 or 2 cm) raise the transmission pan. This does not work on facelift vehicles as facelift has longer crossmember bolted with 4 bolts on each side (see photo below).

Without this tool it will be very hard to unscrew the top bolt, because the bolt is under exhaust manifold. On S350 4MATIC this tool is not needed - the bolts are directly accessible. 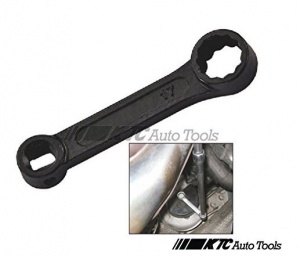 Below is a self-made lifting block that was made for supporting the V12 engine on S600 whilst changing the front engine mounts. It is a very thick (rigid) wood block to fit between the subframe rails. It should be designed to cover the entire engine sump so that the load is spread evenly across the whole sump.

Then the engine may be supported and even raised slightly using an hydraulic jack.

Final dimensions should be;

It should be made out of three separate pieces of wood which are glued together to avoid the grain cracking. 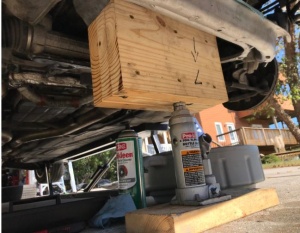