A common issue is the aspirator housing rattles. The solution is to dismantle the OCP and add small blobs of silicon at the four corners to secure the aspirator shroud to the printed circuit board.

Often in an attempt to quieten a noisy aspirator owners will spray a silicon based lubricant in through the ventilation slots. DO NOT DO THIS! The aspirator blower is a self lubricated part, so spraying some Silicone or Teflon on it may keep it quiet for a short while but it will allow dust to accumulate and gunk it up to the point of having to replace the part. The solution is to dismantle the OCP and clean the Sensor and Aspirator.

Warning: if attempting DIY repairs be aware that one of the OCP electrical connectors is particularly difficult to reinstall and if not done correctly can be a nightmare to diagnose.

The connector can feel seated when it clicks into place but if not properly seated will give error codes and malfunctions.

Refer to the excellent article by BenzWorld Member jwells at Post #8: http://www.benzworld.org/forums/w220-s-class/1460424-need-help-c-diag.html

If you remove the OCP and remove the four or five electrical plugs (depending on model), then reinstall the electrical plugs, you need to pay special attention to the second plug in from the left. It is the one with a light gray swing clip on it that you pull to the left to cause the plug to slide itself out. When plugging it back in, if you just plug it in and move the lever back to the right, it will not seat itself all the way back in. 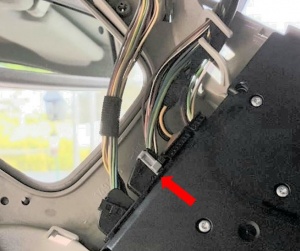 You will receive an error or malfunction warning saying "Light Sensor Visit Workshop", and it will cause three issues:

You MUST push in that second plug until it clicks in, then pull the lever back to the right to lock it in place. You will see on the black part of the plug a half circle tract that the light gray clip follows. The left side of that half circle must be right up against the module you are plugging into. 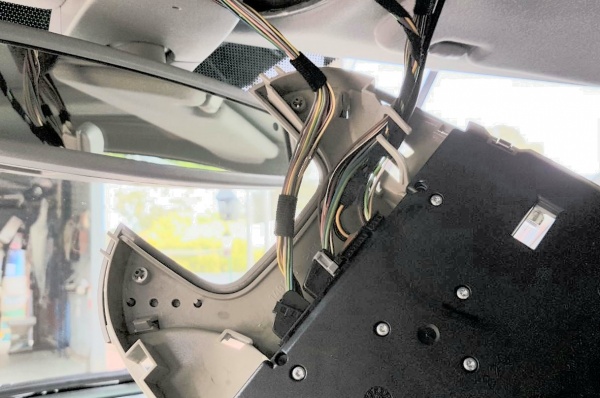 Once the OCP is on a clean work bench it can be dismatled to access the aspirator fan and the thermistor temperature sensor.

The OCP has one circuit board that includes lighting control, sunroof control and the inside temperature sensor. The yellow arrow is pointing at the Air Temperature Sensor or Thermistor in the center of the mini fan. 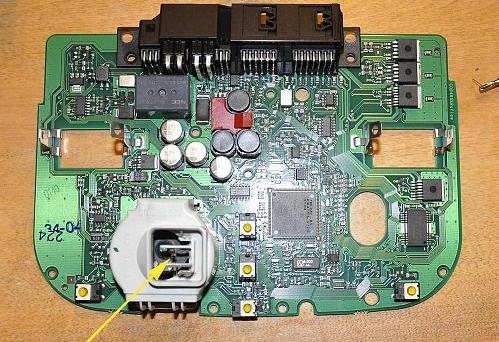