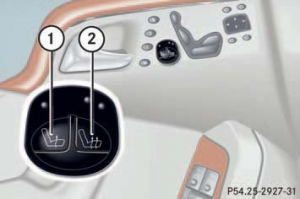 Switch on vehicles with seat heating. 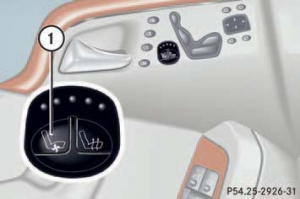 Switch on vehicles with seat heating and ventilation.

The seat heater wires and the supply wires often fail due to constant flexing of over several of the rigid seat support frames.

There are several good articles on performing DIY repair of seat heaters.

The seat heater is activated by push button controls on the relevant door panels.

The left/right front heated seats allow the seat cushion and the backrest to be heated in two heating stages.

The operating states are indicated by two LED's located above the push button controls on the relevant door panels.

Switch off can be accomplished either manually by pressing the push button control or time controlled via the associated control module.

The rear heated seat function is identical to the front heated seats.

A common issue is a broken resistance wire, especially where the wires are constantly flexing at the seat edges nearest the door.

With a bit of patience the break can be found and repaired. Alternatively the resistance wire can be left in place and an aftermarket seat heater retrofitted.

This DIY repair assumes the seat heater is not working due to a broken resistance wire and that the seat has been removed from the car and dismantled.

The seat ventilation is activated by push button controls on the relevant door panels.

Note they are ventilators and not really coolers. It appears M-B research has shown "prolonged use of cooled seats as opposed to ventilated seats, promotes back pain".

The idea of seat ventilation is to cool the contacted seat area by blowing air over the inside of the seat cushions (directly towards the occupant) thus removing some of the driver or passenger's body heat and reducing the 'sticky' back or behind effect which is common on a hot day. They are particularly useful if you need to wear a suit in the car on a hot day.

The seat base fans suck internal cabin air from under the seat and blow it over the inside of the base seat cushions (directly towards the occupant). The leather seat covers have small perforations to enhance the air flow cooling effect.

The seat back-rest fans suck internal cabin air through vertical inlet ports in the rear of the seats and blow it over the inside of the back-rest seat cushions (directly towards the occupant). The leather seat covers have small perforations to enhance the air flow cooling effect.

A slight improvement in seat cushion ventilation performance can be obtained by directing air conditioned air to the foot rests so that the seat ventilation fans pickup this cooler air.

W220 commonly experience failed seat ventilation in either one or more base seats and back rests.

A common failure mechanism is for the fan supply wires to break and go open circuit. It is a relatively easy fix to remove and dismantle the seat and repair the broken wires. 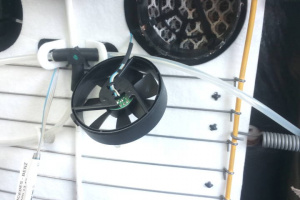 The general opinion is that the seat ventilation is hardly noticeable. This is a typical criticism of the OEM design; "M-B figured out a way to make quad zone climate control and even vents in the B pillar in the back. But they couldn't get the damn vented/ac seats to work well."

Some M-B enthusiasts have replaced the original relatively small fans with larger fans and stated "it's WORTH the damn time, what an awesome mod!", and "I drove around for the last 3 days with this mod, and I LOVE IT. It did make a big difference, now I can feel cooler air through a tee shirt or even through a long sleeve shirt, so much so, that after 15 minutes or so, I have to lower the fan speed to avoid it being too cold. And noise is not an issue even at full speed, as it is drowned with the engine noise and radio."

In an attempt to quantify how well the OEM seat ventilation worked in a W220 S500, BenzWorld member ricebubbles measured the temperature of the seat back rests for an occupied and an unoccupied seat and with the ventilation fans off and then on their maximum setting. The back rest of the occupied seat was of course warmed by the occupant's body heat.

The measurement conditions were: 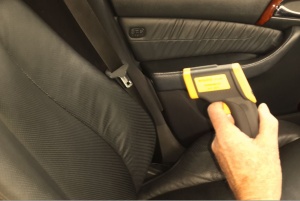 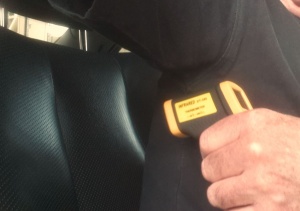 The average temperature results were:

The only possible conclusion is that the OEM seat ventilation makes hardly any measurable difference which is supported by anecdotal evidence that from the occupant's point of view there is no discernible cooling effect.

The method involves purchasing slightly larger fans and trimming away some fan and seat padding material to mimic the form of the original fans and their mounting holes, only in a slightly larger size to suit the replacement fans.

After doing the modification another M-B DIYer stated "it now actually gives purpose to the feature and utility to be able to lower the ventilation settings (before I used high or nothing)".

With acknowledgement to BenzWorld members bobgodd, timeToy, berti_00, 4DGeorge et alia for developing a seat ventilation improvement modification and for documenting the steps. 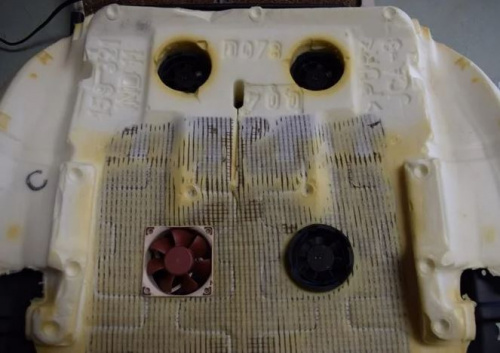 Modification to Improve Performance of Seat Base Ventilation Fans

Thanks to MBWorld member RJC here's a tip to truly cool the bottom seat cushion.

While you have the front seat removed to replace the fans with larger ones, cut a 3" (75mm) diameter hole in the top of the plastic vent that's under the seat/carpet which is there to heat/cool the feet of the back seat passenger. Then get some foam and plug the rear facing openings. These vents are easily accessible afterwards by moving the front seat as far forward as it will go, so you could try just blocking 50 - 75% of the air flow first. Then if you feel inclined, block the whole outlet later.

When you run the AC, set it to bi-level and some of the cold air that passes under the seat will also be directed upwards and get sucked up by the fans directly into the seat bottom cushion.

DIYers who have done this modification report that the seat cushion got so nice and chilled, everyone that tried the seat loved it!

Note the E-Class and S- Class have different seats. The details for an E-Class are provided as a guide only.

For an E55, the stock fan is a Papst, PBT-GF20-FR size is 60x60x10mm. DIYers suggested for higher performance replacements use either 80mm or 92mm fans which are no more than 15mm thick and preferably the Delta EFC0812DB-F00 which is a good replacement.

Note the blue and yellow wires are not used.