On a really hot day as you walk up to your parked car, point the tip of the Remote Key at the small plastic square which is the Infrared (IR) Receiver in either Front Door Handle and press and hold the Open Button.

This immediately allows any build up of hot air inside the car to be dissipated.

Once underway you can close the sliding sunroof and side windows using the Convenience Closing Feature. Press and Hold the Recirculate button on the Automatic Climate Control (ACC).

Like wise when leaving your car parked, if you wish to close all of your windows and sunroof by a single command, point the tip of the Remote Key at the IR receiver in the Driver's or Passenger's Door Handle, and push and hold the Lock Button.

Issue 1 - Does not work properly

The Summer Opening and Convenience Closing Feature does not work properly or at all.

Solution 1- Does Not Work Properly

The windows and sliding tilting sunroof must be synchronized using the Global Synchronization technique for the Summer Opening and Convenience Closing Feature to work properly.

A very common issue is that the Summer Opening and Convenience Closing Feature stops working due to cracked solder joints on the IR receivers in the door handles. 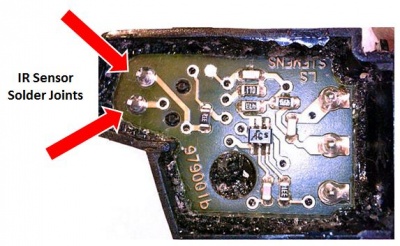 This is presumably due to vibrations caused by the constant opening and closing of the doors.

It is surprising to find many owners who do not realise that their M-B has the Summer Opening and Convenience Closing Feature due to this issue.

Fortunately with a small amount of technical expertise faulty IR Receivers are easily fixed with a DIY repair.

Note it looks like M-B changed the design for securing the IR Receiver in the door handle from roll pins to a clip sometime around 2004.

The next link to article by Benz World Member, ricebubbles, refers to a 2003 update W220 S500L which uses mounting clips to secure the IR receiver. Refer to BenzWorld Publication Version 01 posted 2012-02-02:

A BenzWorld Member with a 2003 E320 and an intermittant summer convenience feature, was told by an independent garage that he needed to order a new IR receiver for the door and as this is a security item it can only come from a dealer @ $450 AUD + Labor to fit.

He tried a little experiment. He got a C-Class door handle that had an IR Receiver, connected it to his car and then tried using his own key. The Summer Opening and Convenience Closing Feature worked fine. This confirmed that the IR receiver was faulty. He didn't say whether he was able to transfer the C-Class IR receiver into his door handle or make the DIY repair to the cracked solder joints.