Automatic Rear Head-rest/Restraints are fitted on a 2003 update W220 S500L model with electric rear seats and lumbar adjustment in the back-rest.

The Automatic Rear Head-rest/Restraints consist of head rests which can be lowered to improve rear visibility and which automatically raise up and lock into position when the rear seat is occupied.

They can be raised manually by reaching over the seat and lifting them into position.

They can be raised remotely by using the head rest button on the dash board.

The actual head rest may be manually adjusted for angle to suit the occupant.

Left to right in the next photo: Bladder, solenoid release actuator and mounting mechanism. 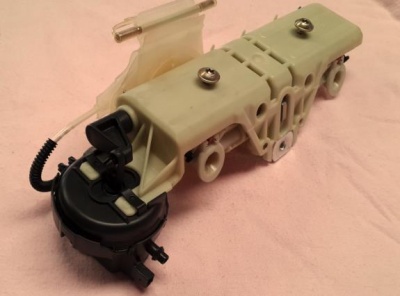 The rear head-rests/restraints automatically move into the up position whenever anyone sits in a rear seat and fastens their seat belt. All three head-rests may be lowered by momentarily pressing the button on the dash. Holding this button pressed will also raise the two outer head-rests. The centre head-rest must be raised manually.

The Air Bladder is a clever device in the shape of a butterfly and when inflated applies torque to the head-rest axle and slowly and quietly raises the head-rest. In the fully raised position a spring loaded mechanism locks the head-rest/restraint into position. Closeup of Rear Head-rest/Restraint Bladder 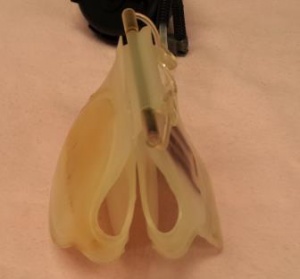 Once fully raised and the head-rest/restraint is locked into position, it cannot be lowered manually. To lower each or all head-rest/restraints requires a momentary press on the dashboard button which sends an electrical signal to the solenoid actuator and the PSE Pump.

The Rear Head-rest/Restraint Actuator usually has two part numbers stuck on it. The numbers are: 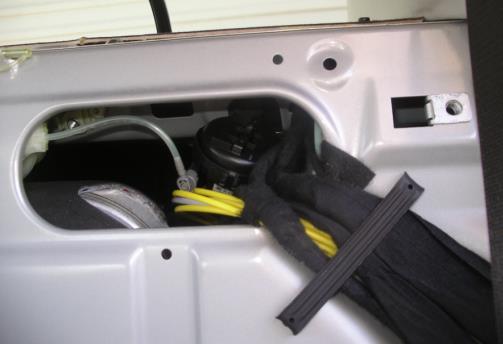 The procedure to remove a head rest mechanism is very similar for all three head rests.

1. Remove Rear Seat Squab/Cushion The next step is to remove the rear seat squab. TIP: Move the seat to the maximum forward position. Reach underneath where there are two springs (marked 4 in the next Figure) which must be pressed outwards to release the seat. 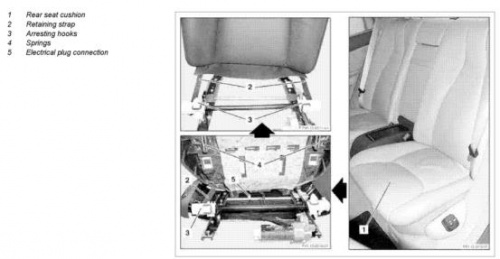 This exposes the Rear Seat Squab Cushion Frame. The two large white plastic objects are the points where the springs locate and hold the seat squab/cushion on the frame. 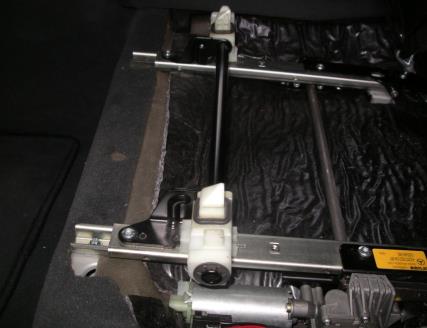 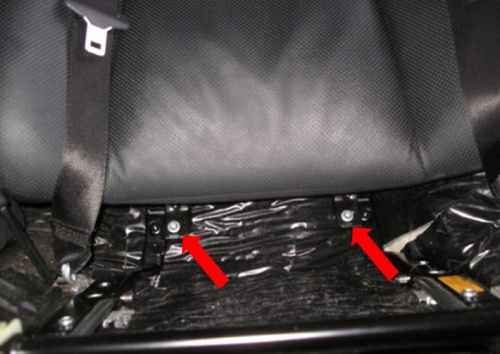 3. Remove Rear Upper Chrome Kick Plate The upper chrome kick plate can be prised off with plastic or wooden wedges. 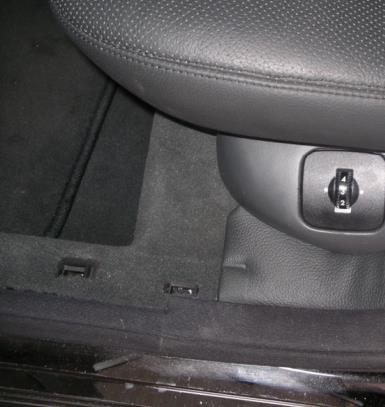 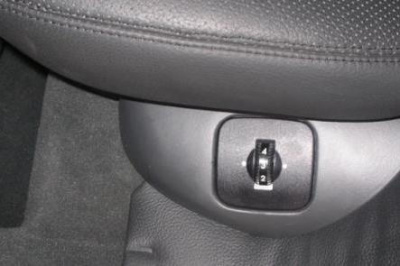 5. Remove Trim Between Rear Seat Backrest and Door Frame By carefully prising and pulling, the leather trim between the rear seat backrest and the door frame can be removed. This exposes the first of the two upper mounting bolts for the rear seat back-rest. Remove this bolt. 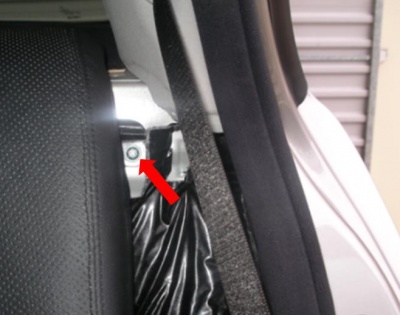 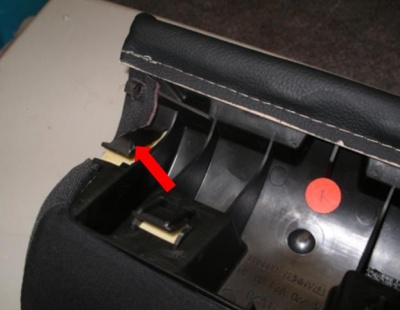 The Centre Console Upper Back-rest can then be pulled out with an upwards movement.

7. Remove Centre Upper Mounting Bolts With the Centre Console Upper Back-rest out of the way it exposes the two centre upper mounting bolts for both Left and Right Rear Seat Backs. 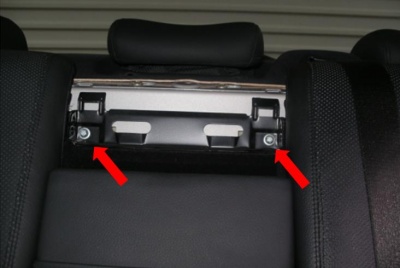 8. Remove Rear Seat Back-rest The rear seat back-rest can now be removed with an upwards movement. It easily clears the raised head-rest which could not be lowered. The first time I did this repair I left the left head-rest in place. The second time, two years later, I had to remove all three head-rests so that I could raise the rear window shelf to remove the right head-rest mechanism. 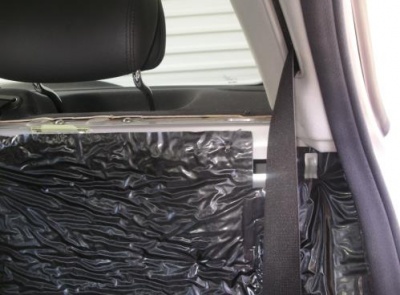 9. Lower the Plastic Lining When the corner of the plastic lining is lowered it reveals the Rear Head-rest/Restraint Actuator.

In the next photo the Rear Head-rest/Restraint Actuator can be seen dislodged from its correct position. 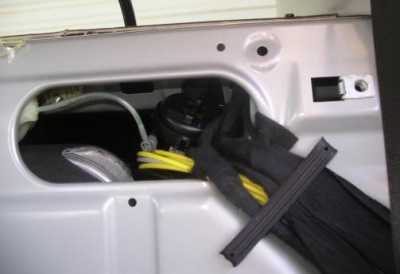 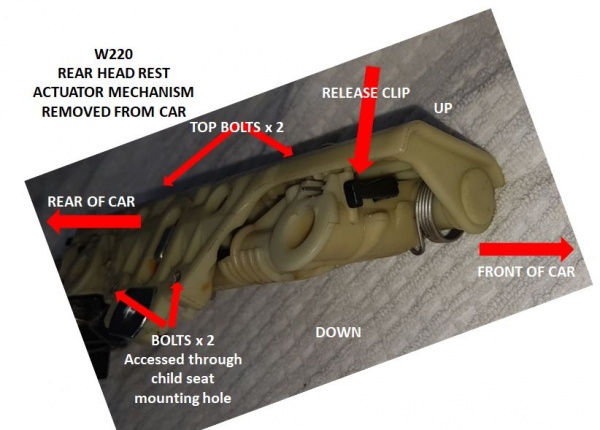 2. Raise Rear Head-Rest If the Head Rest is not already in the raised position, manually raise it.

3. Remove Plastic Cover Around Head-Rest Chrome Arms The trick to removing the plastic cover around each head-rest/restraint arms is to use a flat head screw driver to gently prise up the front edge and then pull the cover upwards and towards the front of the car. 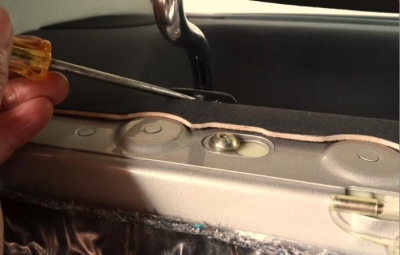 4. Identify the Head-Rest Chrome Arms Retaining Clips Using a mirror, look closely at the holes and you will see small black plastic levers inside. They are positioned on the outer sides of each chrome arm.

This view of the mechanism once removed, shows the black plastic levers (white arrows) which secure the head-rest/restraint arms in position. 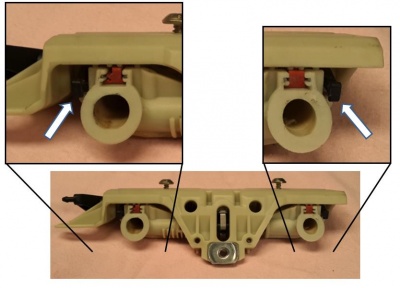 5. Where to Apply Force for Removing Rear Head Rest 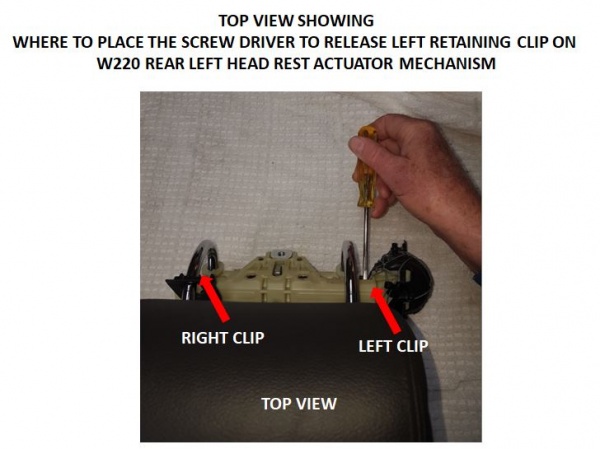 You need to push each retaining clip down about 0.5cm while pulling the headrest arm out towards the rear of the car.

6. Direction of Applied Force for Removing Rear Head Rest Use a screw driver as a lever over the edge of the access hole to apply a downwards force on the retaining clip. 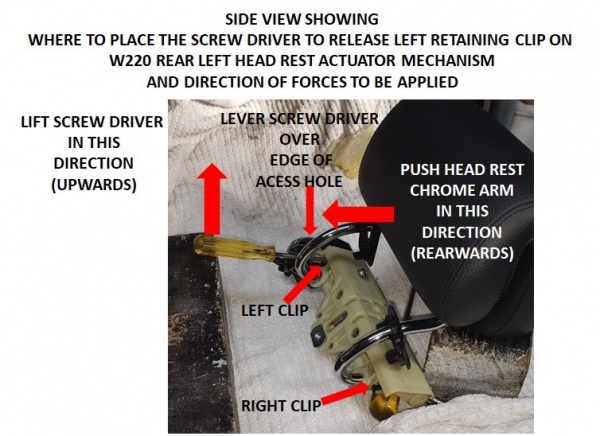 7. Removing Rear Head Rest Second Chrome Arm Having released one chrome arm use the same procedure to release the other side. TIP: You will need to hold the released side of the headrest out a little, while you release the arm on the other side. (Otherwise it will possibly click back into the locked position.)

The technique for removing the head rest mechanisms is slightly different for left and right sides.

The grey pneumatic line connector is easily prised off from the front. 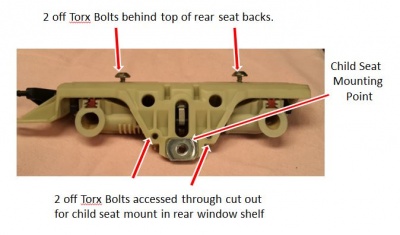 Manipulate the mechanism to expose the electrical connector and remove with long nose pliers. TIP: Be careful not to damage the connector as the plastic gets very brittle with age.

Manipulate the mechanism so that the white bellows can be removed.

Often you will find that several plastic lugs holding the actuator together have broken and allowed the actuator to leak slightly as well as become dislodged.

Later note: TIP: It is not necessary to remove the C-Pillar Trim or even block the Rear Window Shelf up out of the way as per paragraphs 3a, 4 and 5 following. The two screws adjacent to the child seat restraint mounting point can be removed through the hole above the child seat mounting point.

3a. If the tip in paragraph 12 doesn't work then use these steps. After removing the seats the Rear Right Head-rest/Restraint Mechanism is still not accessible until the rear window shelf is either removed or blocked up out of the way. 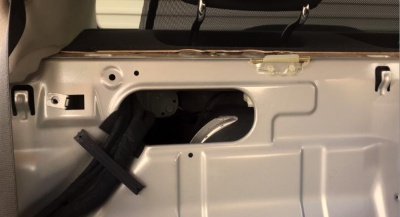 4. Remove the C-Pillar trim on both sides

5. Block the Rear Window Shelf up out of the way 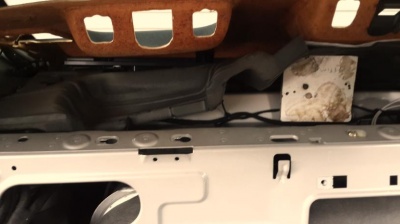 This is what it looked like after removal. The solenoid actuator had come detached completely.

Reinstallation is just a matter of reversing the dismantling procedure. It is a good idea to use some dielectric grease (also used on spark plug wires) to lubricate the pneumatic lines before reconnecting them.

TIP: If you are remounting the new or repaired rear head-rest/restraint actuator (hockey puck) make sure that the slotted lever arm on the piston engages the pin on the head-rest mechanism.

After removing and inspecting as above it is an easy matter to twitch some wire around the actuator to take the place of the broken lugs or to reinforce it so that it doesn’t come apart again. The remaining plastic lugs and the wire now take the strain of the piston when it is under pressure from the Pneumatic System Equipment (PSE) Pump when the head-rest/restraint is commanded to rise. Note this force is quite considerable.

Make really sure of an air tight seal by cleaning them with solvent and applying silicone to the base of the rubber cups before reassembling and then clamping the solenoid tightly together and leaving overnight for the silicone to completely set.

The buttons on the doors which control the Head Rest/Restraints are easily dislodged and lost. New or second hand buttons are not available and the whole EAS (Electrically Adjusted Seat) module is approximately $250. However it is an easy project to manufacture a new one.