There are several brands available and most offer the following; 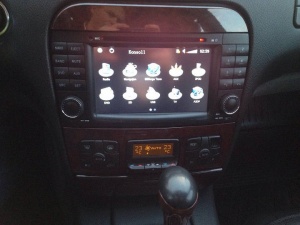 Be aware there are several issues related to installing aftermarket head units:

BenzWorld Member Pinkster used a Seicane head unit replacement in a pre-facelift W220, and noted that his car needed the dash modded to fit. See [1]

The Seicane information and installation instructions are here [2] 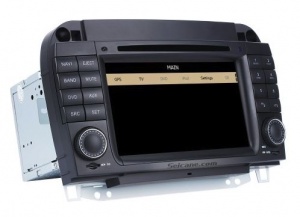 BenzWorld Member Dave2302 used an Erisin head unit replacement with a good description of the ease of installation in a pre-facelift W220 (none Bose Car and no Fibre Optics). See here [3]. 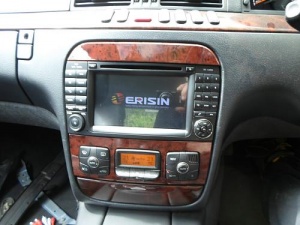 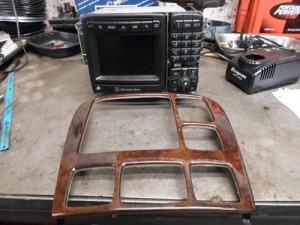 Here is Dave2302's method for modding the OEM dash to make the Erisin fit. 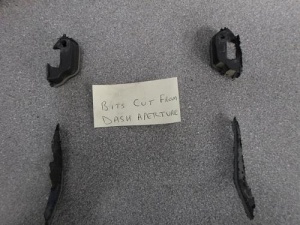 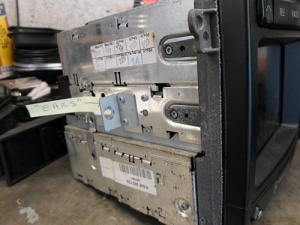 The Erisin ES7882S Media Unit is a favoured after-market COMAND replacement as it “looks the part” perfectly. 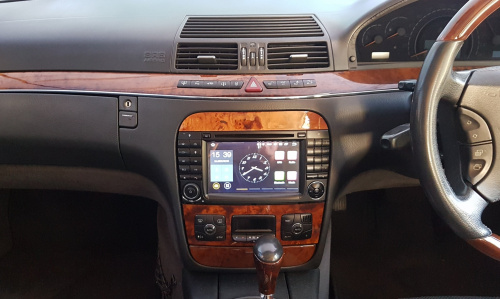 However, it has several annoying features, one of which is the slow boot up. The Erisin ES7882S media unit uses the CAN-Bus signals to wake up and normally no other power connections are required other than +12V and Ground. 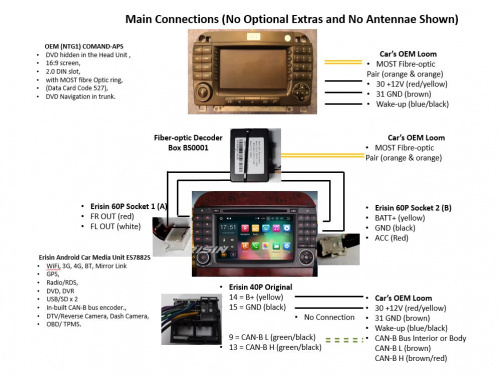 I was extremely disappointed with the slow switch on of the Erisin unit. The device as delivered requires the ignition key to be inserted and turned to position 1 (ACC) or 2 (IGN) before the Erisin would start to boot up after the car has been turned off. It also takes nearly a minute to boot up completely. To overcome this, other enthusiasts have wired the Erisin to be permanently on and to use the in-built sleep function to switch off the screen after a certain time has elapsed. They report that the current draw does not impact significantly on the state of battery charge even after a few days as long as the car is driven regularly. The author’s vehicle tends to sit unused for weeks on end and so any additional drain on a sleeping battery is not desirable, thus ruling out this option. Consequently, the author designed a method to remotely wakeup the Erisin as soon as the car receives an unlock command from the key fob.

Ref WIS PE82.85-P-2101-99SH Wiring diagram of cockpit management and data system (COMAND) control module for MODEL 220 as of 1.9.03 with code 352a has a Wakeup wire (bl/sw blae/schwarz blue/black) connected. On the author’s W220 S500L with A40/3 COMAND which has code 527 COMAND DVD APS WITH NAVIGATION, the wakeup blue/black wire sits at +12V until a wakeup signal is generated over the CAN-Bus. The blue/black wire then momentarily pulses towards 0V for about 0.25 secs ONLY when the Ignition is turned from Off to Accessories or to On and initiates the CAN-Bus wakeup. (Note no wakeup signal is produced when the car is unlocked manually or remotely.) The quick negative going pulse is used to wake up the OEM COMAND. 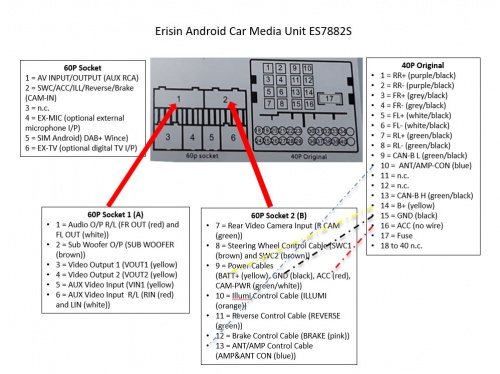 The Erisin ES7882S unit has an ACC red wire as a possible input. If 12V is applied to this red wire the Erisin switches on and stays on as long as the red wire is powered or the ignition is turned on. The ACC is obviously intended for powering and waking up the Erisin using the Accessories (ACC) 12V supply available from the ignition switch. As far as the author can determine for the W220, there is no readily available OEM source of a suitable 12V supply to activate the red wire to wake up the Erisin when it is in sleep mode. Note the Erisin ANT/AMP-CON (blue) wire is a source of 12V power to be used to power/control an antenna or an external audio amplifier. It has nothing to do with waking up the Erisin media unit.

Update as of 20200812 After designing, building and and installing this circuit, I discovered another issue which annoyed me immensely. Whenever the car was switched off and then returned to within say five to ten minutes, which I seem to do quite regularly, the Erisin would go through the whole startup process again, and I realised I needed to have about an hour delay for both switch on and switch off. Fortunately my original circuit described below is easily modified to do this, and what's more, is a simpler circuit. With this modification the I/P1 from the PSE SD Valve is not needed nor is the RL1 relay. To achieve this all I had to do was to bypass the RL1 normally open contact with a small piece of wire soldered in place which effectively makes the RL1 relay do nothing at all. (It could be removed completely.) Then to increase the time delay from six minutes to about one hour, just add a 10M Ohm resistor in series with the 1.5M Ohm making a timing resistor of 11.5M Ohms. Now the Erisin powers up the moment the Remote Control UNLOCK or LOCK buttons are pressed, and will stay powered on for about one hour.

What follows is the original Description without the above modification. A special DIY Remote Wakeup Circuit has been designed which achieves the required function. It requires an extra connection to the Erisin to wake up the media unit and also requires a small modification to the Pneumatic Systems Equipment (PSE) Pump ECU, plus installation of an additional wire from the boot/trunk to the media unit.

WARNING: Be aware the construction of the DIY circuit requires some electronics knowledge, but would make a good project for a beginner.

When the key unlock button is pressed to remotely unlock the car, the PSE pump produces a vacuum which is used to unlock the doors and fuel flap. A signal can be obtained from both the PSE SK Valve and the PSE TD Valve to start a timer of approximately five minutes to wake up the Erisin. The SK (Air Inlet Valve) is only activated when the PSE produces a vacuum. The TD (Fuel Flap Lock Valve) is activated during BOTH unlock (vacuum) and lock (+ve pressure) commands. If these two sources are electronically ‘ANDED’ together the only time an output signal is produced is when BOTH valves are activated, which is the unlock situation. Once triggered the timer produces a timed 12V output signal which is connected to the red ACC input wire on the Erisin, thus waking up the media unit for at about six minutes. This gives enough time to open the door, put on the seat belt, insert the key into the ignition and switch to on. By this time the media unit will have booted up and the functions such as reversing camera, navigation app, music app etc will be immediately available. This output 12V signal also latches the DIY circuit on for the duration of the timing period (about six minutes).

The PSE Pump and ECU is located in the rear left side of the boot/trunk and is accessible after removing some of the internal linings.

Pneumatic System Equipment or PSE Pump in Boot or Trunk 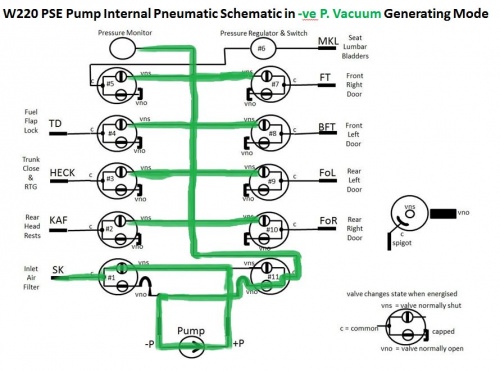 The next diagram shows the PSE ECU removed from its housing with solenoid valves attached. Note it is not necessary to remove the PSE ECU to make the required connections. 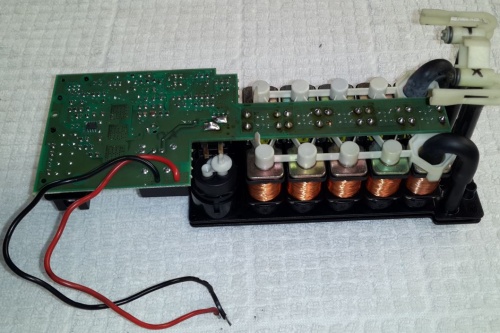 Identifying the PSE Solenoid Valves circuit board connections, each of which has a coil with 34 Ohms resistance. 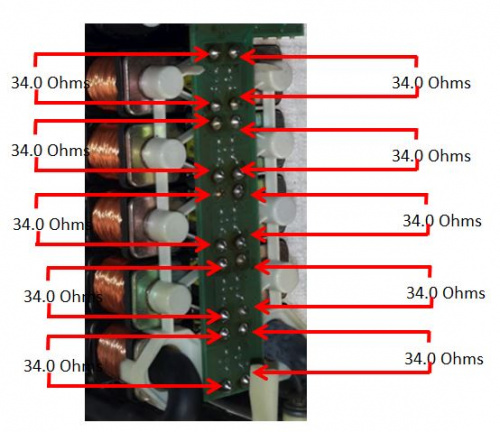 Modification to the PSE Pump ECU

The modification to the PSE that is required is to solder a wire to the SK Valve (control side), solder a wire to the TD Valve (control side), and solder wires to the PSE +ve and the PSE Ground. These wires must be routed externally to the PSE to the DIY Remote Wakeup Circuit by cutting a small slot in the case. (The author was able to use an existing slot in the PSE case for routing the small cable to the new circuit. The author’s PSE pump has been fitted with a copper coil heat exchanger to eliminate excess heat damage to the pump’s internal ports and channels, in the event the PSE pump inadvertently locks on, for some reason. It has already saved one system from permanent damage. See [5] for more details of this modification.) 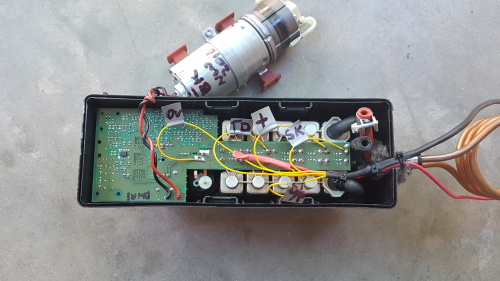 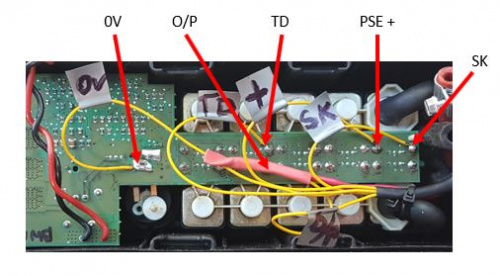 An additional wire must be installed between the DIY Remote Wakeup Circuit (Output) in the boot/trunk and the Erisin ACC (Red) connection behind the Media Unit in the cabin. (The author found this to be quite easy by using a long plastic rod with the new wire taped to one end, and the rod poked through from the boot to the rear left seat area. The same technique was then used to progressively feed the wire under the carpets down the side of the front left seat, then finally under the front carpet and up into the centre console area.)

The DIY Remote Wakeup Circuit was constructed on a small piece of electronics proto-typing Veroboard or strip board, which was fitted into a small plastic component box. The completed unit was installed adjacent to the PSE Pump. (The author simply wrapped the box in soft material and squeezed it into a suitable space adjacent to the PSE, and then secured it with plastic ties.) LEDs, although unnecessary, were used extensively in this prototype, so that it was very easy to observe the operation of the completed unit. All up the electronic components cost about $50. 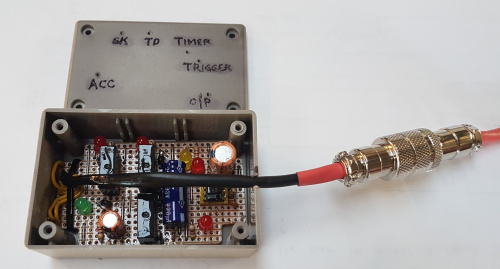 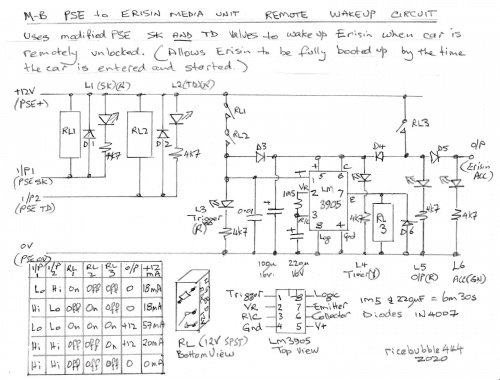 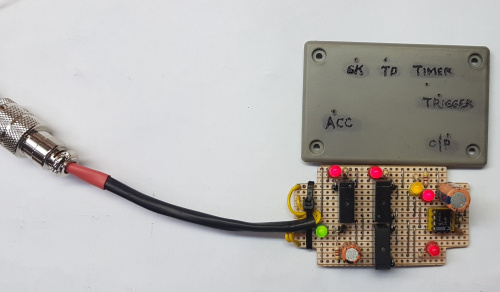 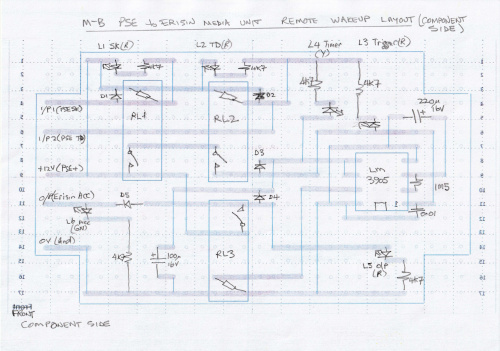 The waveform diagrams show how the circuit only produces an output (O/P and ACC) signal when BOTH the SK valve and the TD valve are activated. (I.e. an output wakeup command is only produced when the car is unlocked using the remote key fob.) 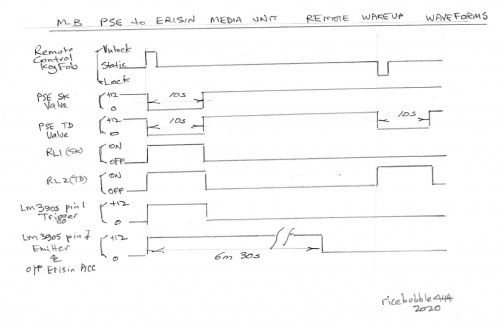 Inspect the table on the circuit diagram which shows the current draw for each possible input and output state. The bonus with this “latching” type of circuit is that there is zero current draw in its off state. Consequently, the addition of this DIY PSE to Erisin Remote Wakeup Circuit does not increase the quiescent current draw from a sleeping battery.

The installation of this DIY remote wakeup for the Erisin media unit in a W220 has significantly enhanced the way the system powers up and makes the whole media unit much more useful during the starting phase. The reversing camera and radio or media player are now available immediately on starting the car and not a minute or so later driving down the road.