Description – D2B COMAND and COMAND-APS with MOST

The COMAND or Cockpit Management aNd Data System with MOST or Media Oriented System Transport is the post W220 Update (from 2003-09-01) operating, display and control unit (A40/3) and is the central component in the COMAND system. It contains a video capable color Liquid Crystal Display (LCD) display for showing information such as operating menus, map data for the navigation system and the TV screen. 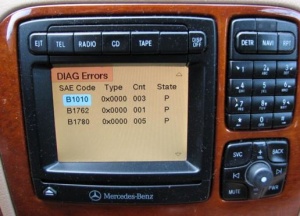 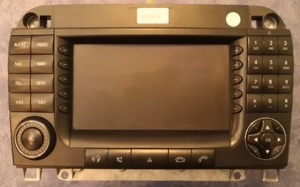 The digital components of the COMAND system are linked to each other over a bus system. The bus is a fibre optic ring, so if any device on it is disconnected or fails, the ring is broken and the system does not work. In addition to the fibre optic ring there is an electrical 'wake-up' signal which causes the devices on the fibre optic bus to wake up their electronics - without this the devices would all need their fibre-optic electronic circuits powered up all the time which would drain the battery. 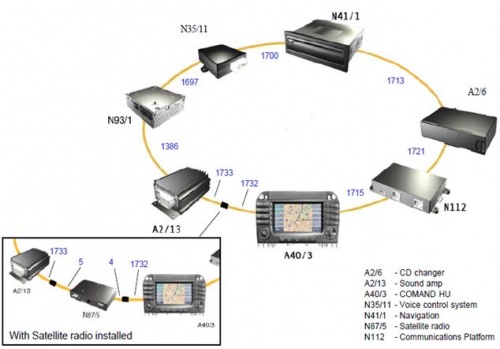 The mobile phone is placed in a cradle connected to a telephone network unit and operated using the buttons on the multi-function steering wheel. It is controlled by COMAND, a Motorola operating system which also allows SMS messages to be read and edited on the existing dashboard display. Reference Wikipedia article on Universal Handy Interface.

It has been prepared by Mercupgrades.com. A company specialising in adding extra options to your Mercedes Benz. There is information about COMAND retrofits, reversing cameras, Blue-Tooth adapters etc for W220 and all other models of M-B. Refer here: http://www.mercupgrades.com/comand+++all+about+the+different+mercedes+comand+systems-article-54.html

Positively Differentiating D2B COMAND and COMAND-APS with MOST

You can tell for sure by looking at one of the connectors (there is one at each of your components on the fiber optic loop).

Male Connector - COMAND-APS with MOST 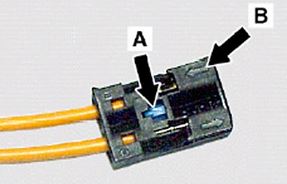 The arrow "A" indicates the release, and arrow "B" shows the directional arrows.

Components - COMAND -APS with MOST

The following systems can be controlled centrally using the COMAND system.

Configuration - COMAND -APS with MOST

The components associated with a COMAND with MOST are configured as: 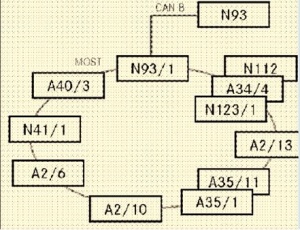 Switch-on/off Function – COMAND -APS with MOST

Opening the driver’s door automatically activates the navigation system for a minimum of 30 minutes. The display in the COMAND remains switched off until the Ignition Switch is turned to position 2. Pressing the COMAND On/Off button only switches the Display.

Issues – COMAND with MOST

Note If a component is removed from the fiber optic bus without connecting the fiber optic leads that went to the component (see posts 7 and 8, http://www.benzworld.org/forums/audi...ow-bypass.html), the entire system will shut down. The loop must be closed with a bypass coupler - posts 7 and 8, http://www.benzworld.org/forums/audi...ow-bypass.html.

Part Numbers – COMAND with MOST

The COMAND-APS with MOST has 3 part numbers on the label - what do they mean?