OEM catalytic converters cost around $1,200 but cheap aftermarket cats are available for under $300 installed.

The arms of the exhaust transmission mount are of a different shape for 5-speed vs 7-speed transmission vehicles. Diesel engine on S320 has only one (right) arm. 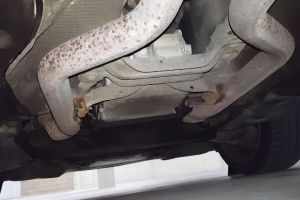 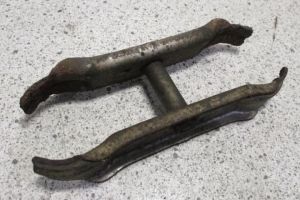 A good way to make sure a catalytic converter is not blocking is to perform a temperature test.

TIP: Be warned that any warranty will be void if there are dents found on the cats from someone trying to hold in the honeycomb substrate. Not a problem if you exceed the warranty period, but a caution for others with a newer vintage / class of car.

One enthusiast discovered a slight rattle coming from a rear cat. He took a hammer and put a little dent in the bottom of the cat to keep the internals from moving around and making noise.

He was lucky and the honeycomb material was still intact but had just come loose.

He reported after one year that the cats were still rattle free.

Some DIYers have hammered dents in three sides to secure the internals.

Be Warned: The material found inside a catalytic converter is toxic and appropriate handling precautions must be used.

Not recommended but a crude fix used by some DIYers for a rear rattling catalytic converter is to gut it. After the front and rear cat assembly is removed from the car, use a long piece of rod, pipe or crow bar to ram through the inside of the rear cat. Constantly shake out any broken pieces and progress slowly. It may take 30 minutes of probing and clearing out to remove most of the internals. Be careful not to distort the outer case or damage the pipes. Once the rear cat. is clear check the pipe between the front and the rear cats. as well.

An illustrated post at [1] by Benz-World member mercy-me shows how to gut a cat. by cutting it open and then sealing with a mechanically fastened metal plate.