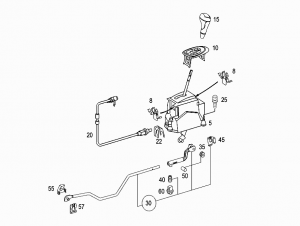 The M-B Transmission Selector allows the driver to select the required mode for the automatic transmission with the choices being usually;

The M-B transmission shifter has a safety feature whereby it is supposed to remain locked in Park unless the proper key is in the ignition and the brake pedal is pressed.

A common issue is that the transmission shifter becomes stuck in the park position thus disabling the vehicle.

In case of emergency, a stuck shifter can be moved out from the park position using force:

The most common cause for this problem is a plastic lever that breaks inside the shifter. Another cause for the problem could be a defective brake light switch (or blown fuse f16 - stop signal switch).

A broken plastic lever can be replaced with an aftermarket metal lever (~30 EUR from eBay using the keyword "W220 trans shifter lever"). To properly replace the lever, a rivet gun and 3 aluminium rivets are needed. The original rivets are of size 3.2x12mm, but in practice 3.2x8mm rivets will work as well.

The broken plastic part can be removed without replacing it, but doing so defeats the brake/shifter interlock, as it will be possible to move the shift lever at all times even with ignition on or off. If you plan to leave unattended children in the car, this fix may not be right for you in which case you should replace the broken pieces to restore the safety feature to its original condition.

Incorrect removal procedure by trying to twist the knob, will damage the plastic core of the gear knob and knob will become loose. One way to fix a loose knob is to use type around the shaft. The idea is to build up some thickness on the shaft. Do not wrap anything around the chrome bezel area, it won't do anything but stop the knob returning to it's original locked position. Only wrap the top part of the shaft.