Fuse charts for all vehicles in compact printable and searchable form are available for download in the section 'Fuse Charts' below.

It is recommended that you keep a printed version of the charts in a plastic sleeve with the spare fuses in the spare wheel well.

Fuses for 12 Cylinder AMG Only 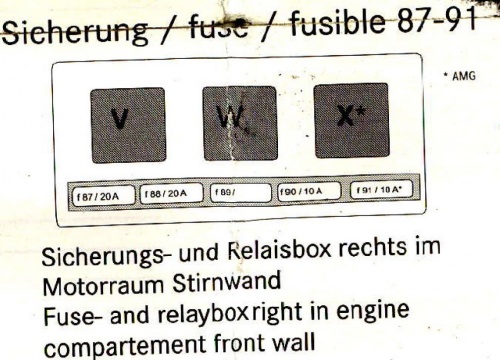 The fuse box is located in cabin dashboard on the passenger side (right on LHD vehicles and left on RHD vehicles).

Original fuse charts and fuse booklets in compact printable form are available below.

The fuse chart along with fuse removing tool and spare fuses are stored in tool box of the spare wheel well.

In addition, there are several large fuses, 100 amp or so, sometimes called "pre-fuses" that supply power directly from the battery via large red wires to the SAMs and the fuse boxes attached to them. The "pre-fuses" are not shown on the fuse diagrams. If these are shorted, the fuse and the block that contains it must be replaced. The 100 amp fuses are not available separately.

There are two prefuse boxes in W220. X4/10 (underneath the passenger footwell carpets) and X4/22 (trunk right).

It has a high-capacity capacitor installed in it, so be careful with tools in the area. The capacitor is purely for smoothing voltage spikes to vital electronics.

Thick red wire goes to battery (unfused). According to wiring diagram, starter's B+ wire is connected to battery through this prefuse (unfused).

Rear prefuse box X4/22 (Terminal block and fuse box (circuit 30Z)) is located behind trunk lining on the right side.

A common issue with W220 Fuses is corrosion on the Fuse Link terminals and the Fuse Box terminals.

Notice double the current you get four times the power! So when you get a current increase due to a failure down stream the heat rockets up dramatically and if sufficient starts to melt plastic leading to catastrophic failure.

Many w220 owners have experienced this with ACC Blower Fuse f33 located in Engine Compartment Right Front Fuse and Relay Module (K40/7). The following images show a completely failed 40A fuse and corroded ones and a melted Fuse and Relay Box. 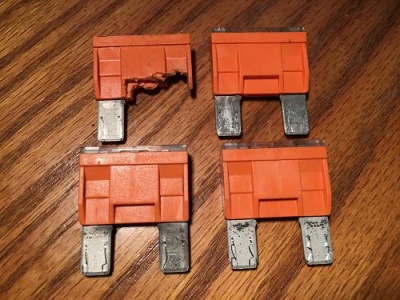 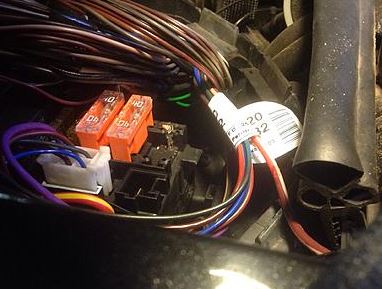 The solution used by some owners with complete f33 failure is to route the power to the blower outside the fuse box even before the problem occurs. At a minimum, everyone should replace the 40 amp MAXI fuse f33 with a new and di-electric greased one. While you are at it why not grease them all.

For further information on DIY diagnosing the problem with f33 see Blower.