The battery is located on the right side of the trunk under the battery cover (1).

The positive (+) terminal is marked (2) and the negative (- or earth or ground) terminal (3) in the next diagram. 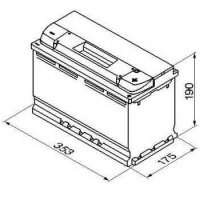 Mercedes-Benz recommends AGM batteries. Good choice is BOSCH S6 013 95Ah 850A battery with AGM-technology (after 2015 the model is denoted by S5 A13).

There are many battery monitoring tools available such as simple LED indicators showing good mediocre or bad battery state of charge to full electronic high performance Digital volt Meters (DVM), and clip on current measuring meters. One of the latest and most convenient is a three in one device which plugs into the 12V outlet in the cabin, and which shows the battery voltage on a digital display as well as the interior temperature and provides a convenient USB charging outlet.

With the 12V adapter system the battery voltage may be easily monitored during normal driving conditions.

If you are down below 12.4V overnight, your battery is at the end of its life. Continue to use it will cost you a new alternator. W220's take lots of current (amps) to maintain the electrical systems even when you are not using your car.

If you find that the battery is constantly going flat or the unlocking system seems to take a long time to respond, it could be that you have a low voltage battery caused by excessive quiescent current draw. The W220 is particularly prone to large quiescent current draw, often called parasitic current drain through it's proliferation of electronic circuits some of which are constantly activated. Sometimes the electronic circuits can develop issues and become heavy continuous users of battery power. When the car has been locked and has fully gone to sleep (takes at least twenty minutes) the quiescent drain from the car battery must not exceed 0.05A or 50mA.

Follow these steps to test the current draw of locked vehicle:

If the battery draw does not drop after half an hour, you may try to remove fuse after fuse until the draw drops. Then using fuse charts locate faulty device. Be warned this technique can require a lot of resetting ECUs afterwards.

A common source for parasitic drain is the navigation device which might not go into sleep if the DVD has got stuck or the electronics has failed. 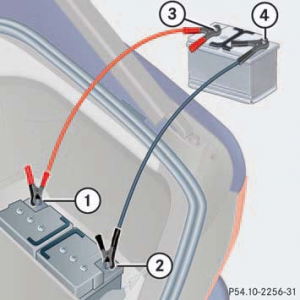 Even in sleep mode, W220 has many consumers which can cause W220 battery being discharged in a few weeks. If you are out of town for over a week, you should hook up a charger to the battery and use a timer to kick it on for about one hour daily. It is a good idea to install a charging point inside the engine compartment for easy access while vacation charging or using STAR DAS. (MBs after about 2006 have such charging ports fitted at the factory.)

Charging from Inside the Engine Compartment