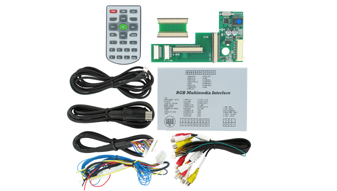 Produced by Connects2 in 2009 (see page 69). Not sold anymore, but can be bought from some retailers.

There are also 2 video outputs and an audio output.

Selection can be made by infra-red remote control or by the NAV button on the COMAND. The Remote control can also be used to adjust the picture via an on screen menu. If a camera and reverse signal wire are connected it will automatically switch when the vehicle is put into reverse gear.

The head unit shown in the installation instructions is taken from a 2006 Mercedes S-Class W220 LHD. The modification of the head unit will be similar in the CL-Class.

During the installation it is advised that the keys are removed from the ignition, until all components are reconnected.

Disclaimer: Please observe the law in the country where this product is installed. It may be illegal for TV/DVD pictures to be in view of the driver whilst the vehicle is moving. 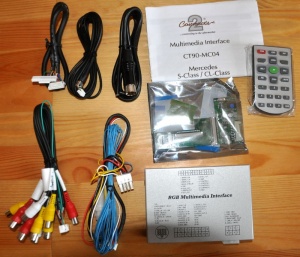 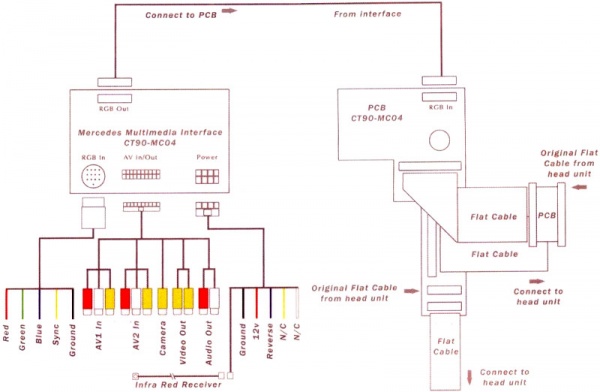 Remove the COMAND from the vehicle using COMAND removal instructions.

With all connections made, securely mount the interface module and head unit back into the vehicle.

The interface consumes around 190mA of current, therefore, it should not be left connected directly to the battery. It is safe to connect the interface to ignition wire (e.g., cigarette lighter wire) since if not connected to power source, the COMAND will work in pass-through mode acting as if multimedia interface is not installed.

Test the unit; the 'NAV' button should now switch through the AV sources. Use the remote control to adjust pictures:

The kit supports video input only. To input the audio an FM transmitter or modulator will be required. The interface will act as an audio switch. The output will repeat AV1 or AV2, depending on which picture is selected.