W220’s have two types of transmissions;

The seven-speed (722.9) is also referred to as NAG 2 {Neues Automatische Getriebe 2} New Automatic Gearbox 2 or 7G-Tronic.

The 722.9 uses a newly-developed, suggested-use-only transmission fluid, referred to as ATF 3353. It promises a higher friction consistency, thermal stability, and temperature rating. ATF 3353 can also be used on previous model 722.3/.4/.5/.6 transmissions. This special ATF is available from Shell & Fuchs Europe oil suppliers.

For the updated bevelled pan with round indentations, the overflow pipe length was increased. 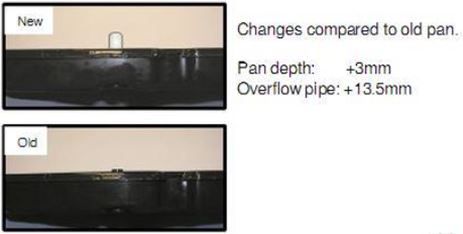 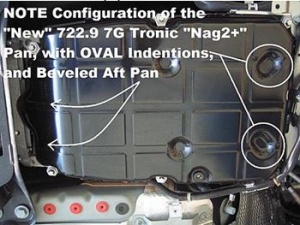 The 722.9 or 7G-tronic seven speed automatic transmission does NOT have a dipstick, so checking fluid level via a dipstick is not possible. But, with a few quality tools a moderately competent person can service their own 722.9 transmission and check the level themselves and perform a complete fluid change as well.

Particles in a Transmission Filter

An excellent example of particles found in a M-B transmission filter was provided by FixEuro.com. Refer to: [1]

A short pictorial summary is provided here with acknowledgement to FixEuro.com. It demonstrates quite clearly why the transmission needs regular servicing. The torque converter drain plug was removed from the 722.6 transmissions in mid 1999 and consequently first generation 722.9 transmissions did not have one. It was reintroduced into the series again later, exactly when is TBD.

The best solution to a thorough fluid change is flushing via the coolant lines in conjunction with a pan drop, filter change and refill via the overflow tube, and finally setting the correct fluid level using STAR to monitor the fluid temperature and the overflow method.

A DIY flushing system which changes the fluid in the torque converter and the transmission cooler is shown below.

With thanks to BenzWorld Member, atmsmshr, for the translation from German. Refer to [2].

An important criterion for customer satisfaction with automatic transmissions is the Shift quality. Not only in the more recent state of the transmission, but is constant over the entire life-cycle.

After the introduction of the optimized disk set in Converter lockup clutch (increasing the number of groove-72 in 02/2004) for Long-term stabilization of the shift quality, and the conversion of NAG1 on the NAG2 used oil, is the oil change is another step to optimize shift quality to the shift quality high even with high mileage on a hold level.

Through the unique oil change oil embedded particles are removed, the entry mostly in the first 40,000 km takes place and the comfort of the impairments have quality control, so can a one-off (and not rolling basis) Oil Change was determined.

An additional contribution to this the newly developed transmission oil ATF3353 (AO019894503) that we 722.9 since production start in automatic, this automatic transmissions fill of home.

For vehicles with ASSYST service position was already in the scope of maintenance recorded. We are the service leaves to the endorsement from VIN XXXXXXXXX to expand from WIS Update 5.3 is the corrected service leaves visible.

For vehicles with ASSYST Plus, the service will automatically position the service sheet inflicted by the maintenance computer. The necessary change in the records is only possible from record-release 09.2005.

Given the information stated in the M-B Bulletin and for good practice, it is obviously a good idea to perform a regular transmission flush and service every 3 years or 80,000Km (50,000 miles).

A DIY fluid change system has been developed and tested and it is a relatively straight forward task but is not for the faint hearted as it requires considerable technical ability. Reference BenzWorld Member, G-AMG who stated,

"...this job is not for the average DIY'er. It requires a "Significant" number of Tools, including the STAR Computer, access to the LATEST WIS, which is AN ABSOLUTE **MUST** IN ORDER TO CORRECTLY ADJUST THE FLUID LEVEL!!!

Also, I will be *CLEAR*, there are MULTIPLE VARIATIONS of these Transmissions, you MUST VERY VERY CAREFULLY Research your exact Transmission, to ascertain WHICH procedure to use, and which Transmission FLUID to use. The latest transmissions use the New 236.15 Spec Fluid which is BLUE!!!!! This Fluid is ***NOT*** Back-Compatible!!!

ANOTHER *HUGE* CAVEAT!!- *DO NOT ATTEMPT THE "I'LL TAKE A LASER TEMPERATURE MEASUREMENT OF THE PAN" TRICK TO GET THE OIL TEMPERATURE!!!" I have a nice, High-End Fluke Laser Thermometer, and what I was measuring at the Pan, and what STAR was Reporting. It was OFF by a much as 10°C! ***YOU MUST BE EXACTLY ON TARGET TEMP TO DO THIS JOB!***, and the Car must be **LEVEL**, so you will have to have it on 4 equal Ramps/Jack-Stands.

As you know, there is NO Dipstick to check the Fluid Level, and you "Pump" the Oil *UP* via the Drain-Hole. Instead, one needs to bring the oil Temp to a PRECISE temperature, and "Visually" evaluate the Flow of Oil out the Overflow Pipe. What an IDIOTIC way to do an automotive job!!! My "moderate flow" or "Drip pattern" may be waaaay different than the next guy's interpretation. It's quite a "Joke" in my mind... BUT!! You must change the fluid in these boxes, so you're STUCK!!"

Note because the flushing process is powered by the vehicle's own transmission pump, the dangers of over or under pressurising the system are eliminated.

WARNING Be warned in advance that the fluid level is checked via an overflow method using a MB STAR Diagnostic System monitoring the fluid at a specified temperature.

A reasonably complete transmission service kit is available with SOME of the parts needed. 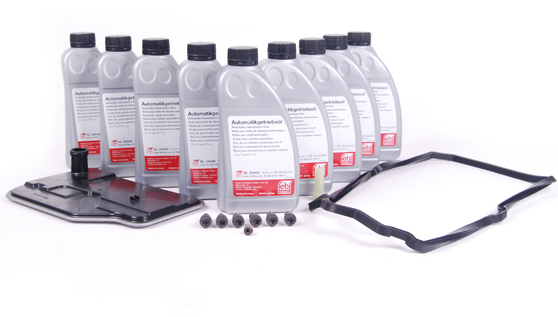 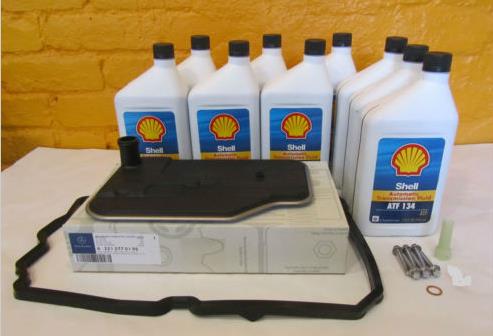 Check the contents of these kits carefully and if necessary additional individual parts for the DIY transmission fluid and filter service can be obtained; 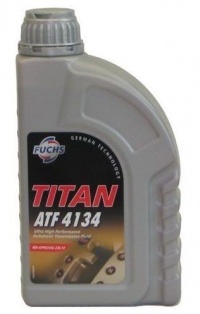 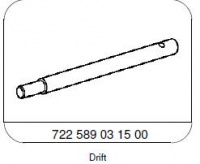 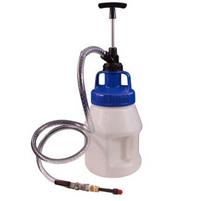 Before proceeding, please verify that you have the new updated pan. If not, make sure you have the updated pan in hand before proceeding. If necessary search for WIS document BT27.10-P-0006-01W "Oil pan and overflow tube modified" which states, "Whenever a transmission is removed for repairs, the earlier oil pan ...with the black overflow tube ...should be replaced by the new sloped-surface version ...with the white overflow tube." See Identifying Pan Types. 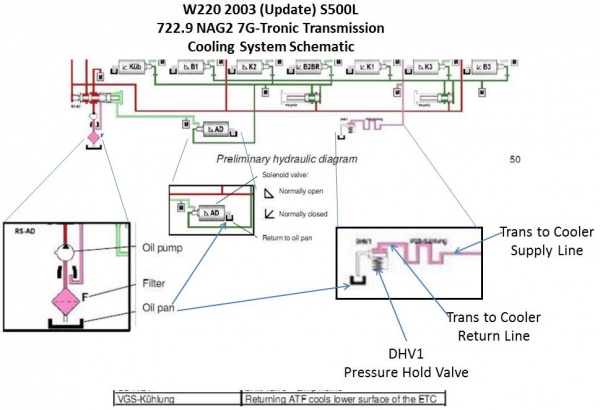 All trans fluid pumped from the pan goes through the filter first.

All the trans fluid flows through the cooler unless the solenoid valve ‘AD’ operates and bypasses fluid to the pan. The diagram shows it as a normally open valve. This means there are two paths for fluid to return to the trans pan;

What causes AD to operate is TBD. (My first assumption is that the Solenoid Valve AD may have something to do with controlling the temperature of the trans fluid during warm up, normal operation and overload operation. I can envisage the Trans ECU monitoring the fluid temperature (we know that is has at least one temperature sensor as the fluid must be at exactly 45°C for correct level setting using the overflow method) and using this value to warm the fluid as quickly as possible. Above about say 80°C all fluid should be pumped through the trans cooler located in the radiator.)

Because of the multiple return paths, installing a flush system in the trans coolant supply line will replace some dirty fluid but not necessarily all of it. If the solenoid valve AD is open during the flushing process, some fluid will bypass the flushing system. Unfortunately this doesn’t seem to be avoidable.

The location of a typical 722.9 transmission cooling lines are shown in the next diagram. 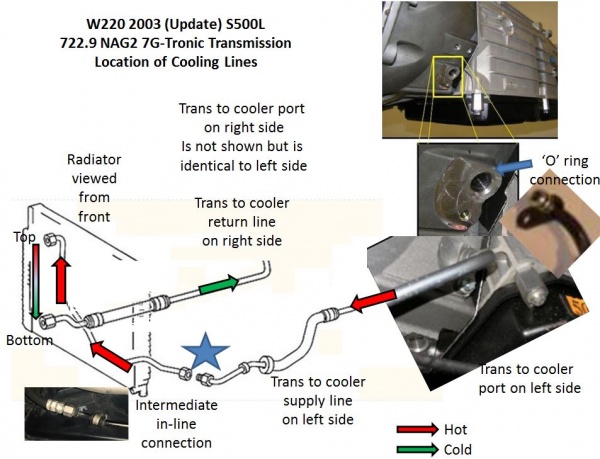 On the W220 S500L with 722.9 Transmission, the trans cooler is located in the radiator and is mounted vertically on the right side of the radiator as seen from the driver's seat or the rear of the vehicle. 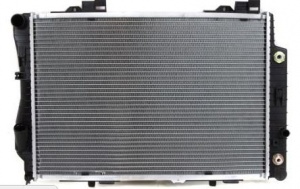 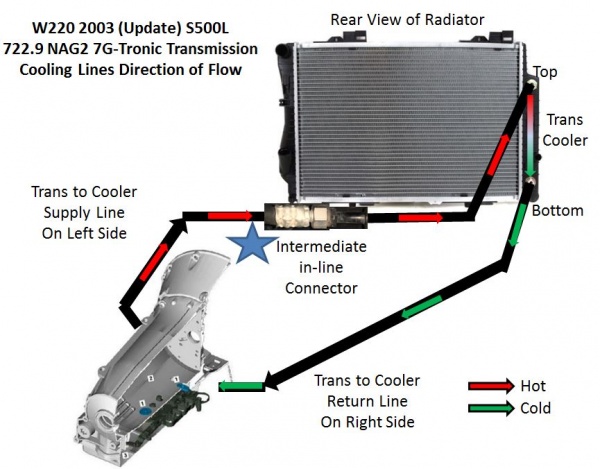 On the author's W220 2003 (Update) 722.9 Transmission the Trans to Cooler Supply Line is in two separate parts and has a convenient connector installed, see Blue Star in diagram above. The DIY Flushing System design utilises this convenient and easily accessible connection to install the flushing system. 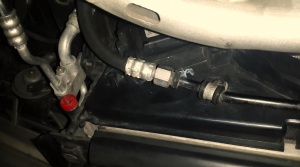 This DIY Transmission Flushing System was designed particularly for servicing a W220 2003 Update S500L (Long Wheel Base Sedan) with;

The DIY Flushing System may be of use on other vehicles but will likely need minor adaptation, particularly as to how it is connected into the vehicle.

The design of the flushing system was based on the excellent contributions by BenzWorld Members;

Most professional transmission fluid exchange machines use a bladder type system to hold the new fluid (usually about 16L). In operation the old fluid flowing from the pump to the transmission cooler is interrupted and the equipment inserted into the loop. The old fluid supplies the hydraulic force to exchange the old fluid for the new. Sometimes they supplement the pressure with a low pressure pump. The new fluid is returned to the pan, where it flows through the filter first, then into the pump, valve body, torque converter etc.

This DIY design opens the trans to cooler supply line (left side) and using appropriate brass couplings and reinforced vinyl hoses, connects in the home made flush system as shown. The new fluid container is preloaded with say 4L of new trans fluid and the old fluid container captures the expelled fluid. The DIY System can be stopped and refilled (and emptied) and restarted as often as is needed.

The next diagram shows the DIY 722.9 Transmission Flushing System Connected to the vehicle. 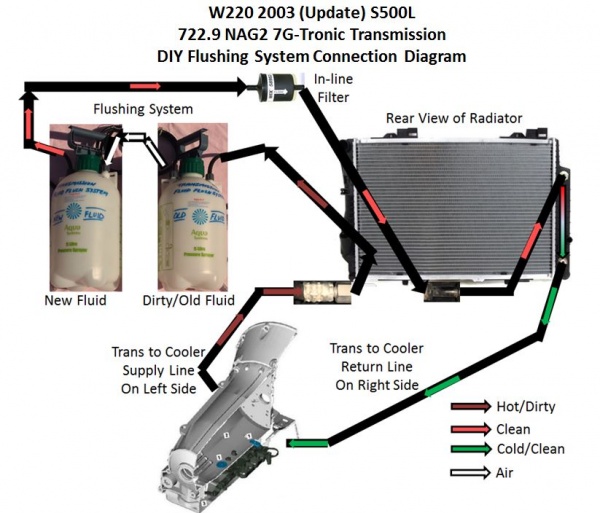 Theoretically no fluid should be lost in the process.

The flushing should be stopped when the preloaded new clean fluid is expended or the colour of the dirty/old fluid looks clean, preferably the latter.

If using the DIY Flushing System it is important to track the quantity of fluid removed from the transmission and put back in. It is very easy to "get lost" during the process so it pays to carefully track the in and out fluid quantities. A table is suggested to aid in this process and has been found to be very helpful.

The final fill level is set using an overflow technique and a STAR SDS or DAS to set the transmission fluid at the correct temperature.

A printable pdf version of this technique is available here, see Post #39 at [4]

A printable pdf version of this technique is available here, see Post #39 at [5]

BenzWorld Member Scott Elliott has produced an excellent video showing an automatic transmission fluid change and oil cooler flush on a W204 but it is very relevant to the W220.